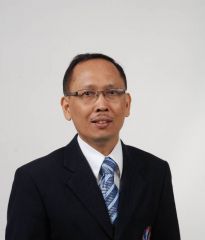 Udin Silalahi received his Bachelor of Law (SH) from the University of Atma Jaya Yogayakarta in 1985 and immediately joined the CSIS Jakarta in mid of 1986. In 1995, he obtained his Master of Law (LL.M) from the University Friedrich-Alexander Erlangen- Nuernberg, Erlangen, Germany. His thesis was entitled: “Franchise according to the European competition law”. After receiving his doctor degree with magna cum laude in Law in February 2001 from the University of Friedrich-Alexander Erlangen-Nuernberg, Germany, he immediately joined the CSIS in April 2001 again. His doctoral thesis was entitled: “Merger control in Indonesia according to the Government Regulation No. 27/1998 and the Law No. 5/1999 in comparison with German and European merger control”. He was a part time consultant at the Commission for the Supervision of Business Competition Indonesia from 2002 to 2013.